Get Your Questions Answered About Borewell - FAQs - Samy Borewells

Get Your Questions Answered About Borewell – FAQs

Is there a standard distance between Bore and Open wells?

There are no standards for separating bore wells from open wells. The wells are scientifically found based on the local hydrogeological state of the region via field groundwater study, which is required for any borewell construction.

Will my Open well become inoperable if a new Bore well is dug nearby?

Bore wells and open wells are two distinct groundwater extraction constructions that tap into discrete groundwater storages known as aquifers. Bore wells are used to access fractured aquifers that are restricted or semi-confined.

However, bore wells accessing the same aquifer (confined/semi-confined) may interfere with each other during mutually pumping if the region falls within the same structural continuity as the other well.

If the bore well casing is not correctly placed in the bedrock, the soil thickness is smaller, and the fractures are on the same line as the bore well, the surrounding open wells may also become dry.

What are the inner and outer casings in a Bore well?

A bore well’s outer casing pipe is the protective pipe installed into the borehole to preserve the soil profile present above the rock in the vadose zone known as overburden. The casing pipe’s function is to shield the borehole from falling debris and to prevent surface contaminants from seeping into the bore well. Typically, the outer casing is installed in the hard layers by drilling a few millimeters into the bedrock.

The inner casing, on the other hand, is only a protective pipe placed into the well till the borehole’s bottom end. The inner casing has a smaller diameter than the outer casing and is typically utilized with holes at specific depths to allow groundwater to flow easily into the well. The inner casing works as a barrier, providing additional protection to the pumping components, particularly when employing submersible pumps.

Is it feasible to clean a bore well/tube well?

It has been stated that the yield of a bore well/tube well decreases over time. The clogging of borewell screens in tube wells, as well as the cementing of clay particles in the case of a limited number of fractures, might explain this condition.

In other circumstances, falling silt and sand-size particles caused by transitory flow inside the pipes lower well yield and make pumping harder. The solution is to flush the well using water jetting or pressure injection.

Why are the yields of two close bore wells so different?

The depth of penetration and extent of inclined fractures may vary in a vertical cross-section even within a few metres of horizontal distance on the ground. This is the explanation for the difference in yield in bore wells even across short distances.

The presence of groundwater in hard rock locations is quite rare. Weathering causes widespread cracks and secondary porosity to form in the top section of hard rocks in many regions. Water is extracted from bore wells by severely worn granular hard rock.

As a result, the diameter of bore wells has no bearing on yield. The yield of a 110mm bore well and a 150mm bore well might be the same. However, the diameter is chosen depending on the depth requirements of the bore well, with a bigger diameter allowing for easier installation of a pumping mechanism with a higher capacity in deeper bore wells.

Get the best borewell cleaning services in Chennai!

What kind of pump is needed to get water from a low-yielding bore well?

Because the static water level of poor yielding bore wells drops fast while pumping, there is frequently less water column for pumping. As a result, an air compressor pump is utilized to extract water from low-yielding wells.

The compressed air is delivered into the nozzles at the bottom of the delivery line, which is placed in the well from which the water is drawn. A combination of air and water is created in the delivery pipe, which is partially exposed to the well or sump containing water.

This air-water combination is expelled via the delivery pipe. As long as the compressed air supply is maintained, the flow will continue. This pump is capable of lifting a modest volume of water from low-producing bore wells.

How the well’s yield is known?

A pumping test is used to determine the well’s yield. It is performed to evaluate how much groundwater can be extracted from a well and the impacts of pumping on the aquifer and neighboring well supplies.

Looking for the best borewell services in Chennai?

SAMY Borewells is one of the leading company of borewells drilling in chennai. We have installation of pushes, pipe resting, h2o system performs for drinking water in domestic and various commercial businesses places, government sectors, through our vast experience with technical background.

Quick Links
Our Services
Reach Us 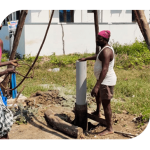 Are Heavy Metals in Borewell Water Harmful? Resolve it at EaseRecent News 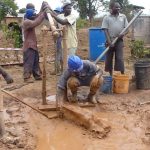